The first mention of the spa dates back to 1562. Since then the baths have gained fame and popularity thanks to the richest and cleanest source of natural sulphuric water in the Czech Republic. Warm and cold springs have almost the same composition and are used by a wide range of effects in the treatment of locomotory, neurological and skin diseases. Take a look at the history of the spas and their healing springs.

The discovery of the effects of the local natural sulphur springs is covered by popular myth. We present it to you in the oldest preserved form recorded in the middle of the 16th century by Tomas Jordan of Klausenburk:
"One peasant from Velke Losiny had a horse, sore, and out of the ulcers and gnashing, was already dying out. Because the peasant could not see him longer in the house to breed and suffer or to infect others, he drove him out of the house. In the meadows near by, horse accidentaly came to the swamps, fell down and lay for three days on one place. Then he began to roll in the mud, leaped ou and he grazed the meadows and drink water for many days. Water gave him back strength and health. One day, peasant came along the swamps and saw his horse so strong ang healthy, he could not believe his eyes. He was convinced that the horse, disappeared long time ago, was torn from the dog or the beasts. Horse came back to the old man, and from there the water began to be consumed. "

The first mention of the spa dates back to 1562. At this time, the owner of the estate, Jan younger of Zerotin, allegedly built a new guest house next to the already existing wooden spa building. In 1580 a significant balneological work by Tomas Jordan from Kluz was published, in which he first reported on the healing of losinian water.
The Thirty Years War and Wizarding Processes in the 17th Century meant stagnation for the spa, served only for the needs of the nearby population. The Witchcraft Processes (1678-1692) required two spa victims - who ended up burned by fire.
In 1724, the wife of Jan Jachym of Zerotin left the wooden chapel of St. Cross that her son Jan Ludvík rebuilt in 1750 on the brickwork and raised the circular structure of the spa pool. The chapel and pool were the only brick buildings in the spa, others were made of wood.
In 1802, Ludvík Antonín (the last of Zerotin genus) sold the estate to the Liechtenstein, and in the second half of the 19th century there was a great development of the spa. In 1861, the headquarters of the Liechtenstein estate bought a flax plant in the spa area and rebuilt it to the spa house Villa Franziska. In 1878 a new swimming pool was built as a two-storey house and in 1884 a wooden arbor over a cold spring was built. Since 1888, the current concept of a spa park with imported trees has been created instead of swamps. 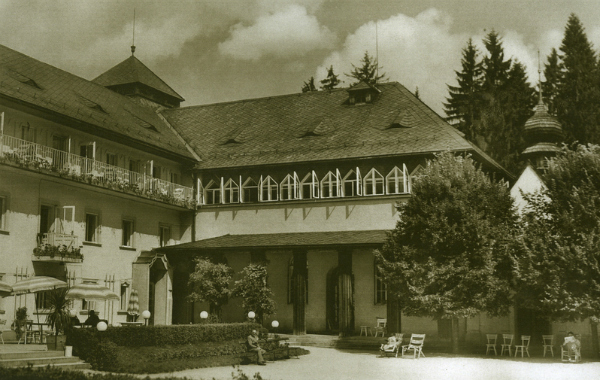 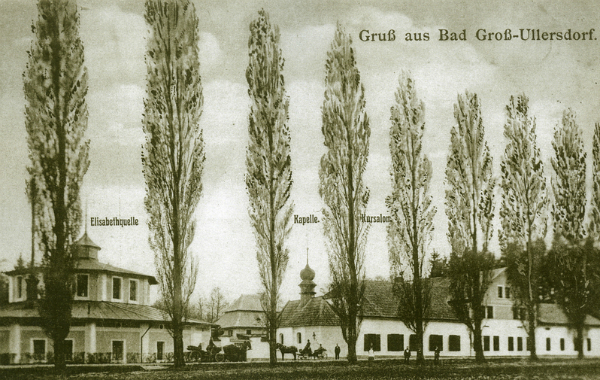 In 1912 the construction of the new modern sanatorium begins. The designer is Viennese architect Alfred Castelliz. During World War I, the baths served as a lazaret. In the twenties of the 20th century, the reconstruction of the old and new buildings was carried out, small finishing works were carried out, and the spa farm became part of the spas.
On January 30, 1930, a fire broke out and destroyed the main spa building, a hall, a restaurant, and a swimming pool. The roof of the spa chapel also burst. The new spa reconstruction plan was developed by architect Alfred Castelliz, who redefined a distinctive classicist look with elements of Austrian folk style. The spa was rebuilt within a year and the Children's House (today's Chaloupka) was newly built. The newly renovated spa was inaugurated on May 1, 1931.
After 1948, the main occupation of the spa facility became a polio treatment. For these purposes, the Šárka building was released, which after the war until 1948 served as the birth hospital department of the hospital in Šumperk. The confiscated villas Gazarka, Brnenka and Marie were also associated with the spa. Since 1954, unspecified lung diseases have been treated in Božena and Chaloupka.
At present, the spa complex consists of 4 spa houses, 1 wellness hotel and a newly built thermal aqaupark. The total capacity of the spa is 335 beds. It treats locomotory, skin, neurological, oncological and circulatory diseases. There is a professional rehabilitation and professional spa care for adults and children from 1 year. The thermal baths are surrounded by 40ha of a splendid spa park with grown centuries-old trees and rare woods. In the spring season azaleas and rhododendrons bloom here. 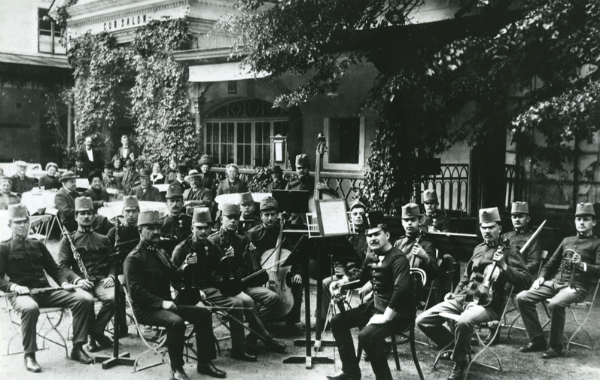 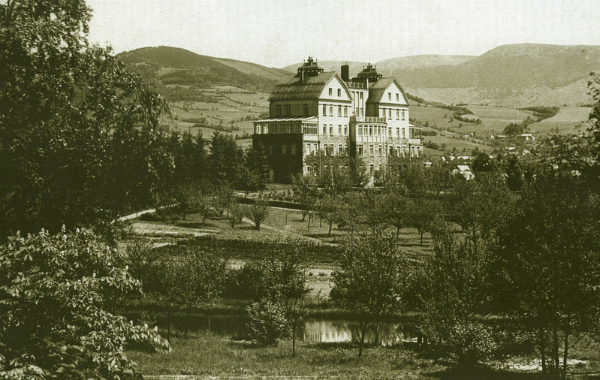 Sulfur thermal springs in the spa of Velke Losiny spark in the tectonic contact between the Keprnicki and Desen's vaults. The water temperature is 36-37 ° C and corresponds to the depth of its formation about 1000 m. It is completely natural, plain, medicinal, mineral, carbon-sodium-type and slightly radioactive.
The typical character of the curative water gives the losinian water also a higher temperature and an increased content of hydrogen sulfide. Chemically, therefore, the losin water is a valuable type of healing water and is the only simple sulfuric thermal water in our country. Very interesting are the physico-chemical sources of losin water in connection with the indicator groups of clients who are treated here. Sulfur content in water is 6.37mg / l, well above the sulfuric acid criterion (typically 1mg / l).
Suplhur belongs to substances that are best absorbed through the skin during the external application and are detectable in the blood after 15 minutes. It is rapidly oxidized to hexavalent and part of the absorbed sulfur is entrained into active metabolism, where it has therapeutic effects - positively affects metabolism regulation.
Since the water temperature is 36.6 ° C, according to the classification, it is hyperthermal (warm) water which leads to an increase in blood supply to the skin and thus to an increased absorption of active elements from the water through the upper skin epithelium. Higher water temperatures contribute to relieve muscle tension. The high content of fluoride ions (5.247 mg / l), which in combination with sulfur significantly contributes to muscle and vascular processes and enhances the analgesic effect of sulfur, is therapeutically significant.
A thorough analysis of chemical composition and long-standing balneological practice show that Velke Losiny water is unique and therapeutically effective.
Spring Žerotín - A
It belongs to the most famous natural healing resources in the Czech Republic and is the richest source of sulfur water in our country. It was built between 1979 and 1980. The yard is 1,100 m deep and sulfuric thermal waters are taken in the crystalline rock environment of the Hrubý Jeseník Massif. The water is clear, colorless with a distinct hydrogen sulphide odor. The temperature is in the range of 35.4 - 36.3 ° C.
This thermal water contributes to the relaxation of the muscles, the flexibility of the joints, releases the spasticity of the limbs, contributes to the strengthening of the muscles by swimming and helps the thermoregulation. The thermal spa uses this spring in the form of whirlpools and sulfur baths and to power the outdoor thermal pool.
Spring Dobra - B
Built in 1976 with a depth of 200m and a temperature of 22 ° C. Due to the low drilling capacity of the borehole, the source was pressurized and is not currently being used.
Spring Petr - E
Built in 1973 at a depth of 150 m and 29 ° C. Because of the low borehole yield, the source was pressure-sealed. These waters are immediately influenced by Eliška spring.
Spring Eliška - F
It represents the original source of thermal water of the Velké Losiny Thermal Spa. Until the year 1970, the spring of Elizabeth was the source of the whole spring structure, after the excavation of the boreholes Petr and Žerotín, the yield of the boreholes significantly decreased and now has only the function of stable natural drainage of the spring structure and stabilizes the groundwater level. The wing was built in 1903 and reconstructed in 1994. Its temperature is 26.5 ° C.
Spring Karel - C
It is a traditional source of cold sulfuric mineral water and is genetically bound to the thermal waters of Elizabeth and Zerotin. The natural spring of the sulfuric water has surely existed here before the establishment of the spa tradition of the Great Losins. In 1903, during the period of significant development of the spa, it was captured by wells at a depth of 4 m. During the hydrogeological survey of sulfuric waters in 1974, practically ceased the flow of cold sulfuric waters, which led to the extinction of Karel and Marie Theresa. That is why in 1975 the well was drilled to a depth of 25 m and thus the spring was revived by Charles. Its yield is today dependent on the degree of use of the Zerotin spring. Drinking water is rich in a variety of cations, and most of these are calcium, sodium, magnesium, potassium and iron. The water from the spring is clear, colorless and has a sediment-free hydrogen sulfide odor.
Spring Maria Theresa - D
After the boreholes in 1974 virtually ceased and this was not restored. Physical disposal occurred in 1993.
Source: Lázně Velké Losiny